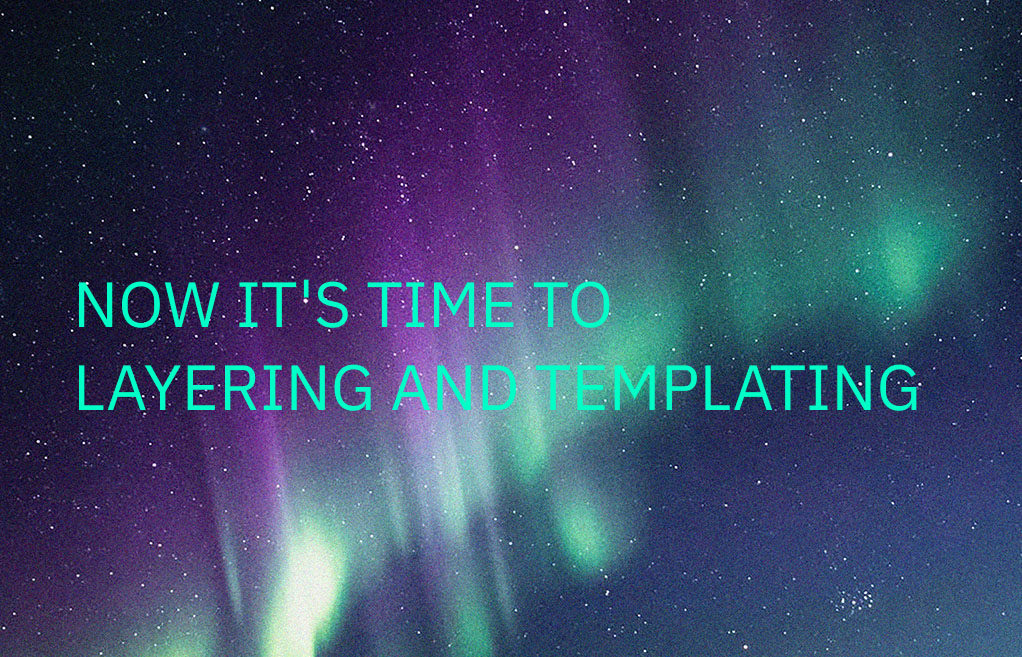 Why do we need infrastructure templating?

For modern cloud native environments, infrastructure templating is critical as it helps simplify the processes of infrastructure development and maintenance, in particular:

Now, let’s explore the most common use cases of infrastructure templating and take a closer look at the benefits that it holds.

During the development process you need to have a pipeline to develop and promote some features from dev to stage and prod environments, the same way as you deploy and test your applications. Using common infrastructure templates and versionating through Git helps you do this and integrate with your existing CI/CD solution. 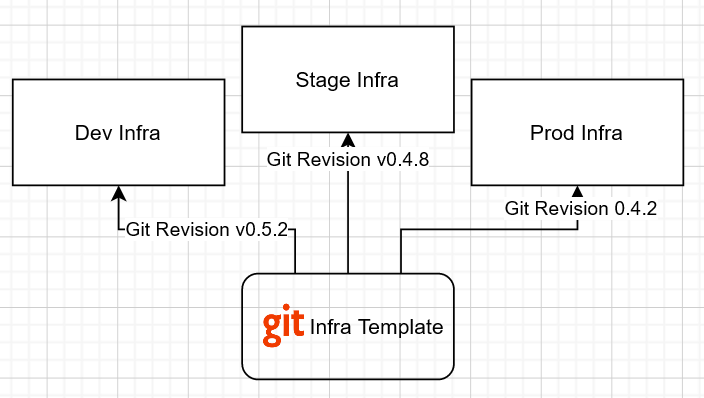 This becomes especially relevant when your company grows larger and you have several teams. The team responsible for creating infrastructure patterns (let’s call it a platform team) can provide these patterns as a complete Infra Template to an SRE team who actually deploys and operates production infrastructures. Beside that the same Infra Template can be used by developers and QA engineers to spawn temporary dev and test infrastructures: 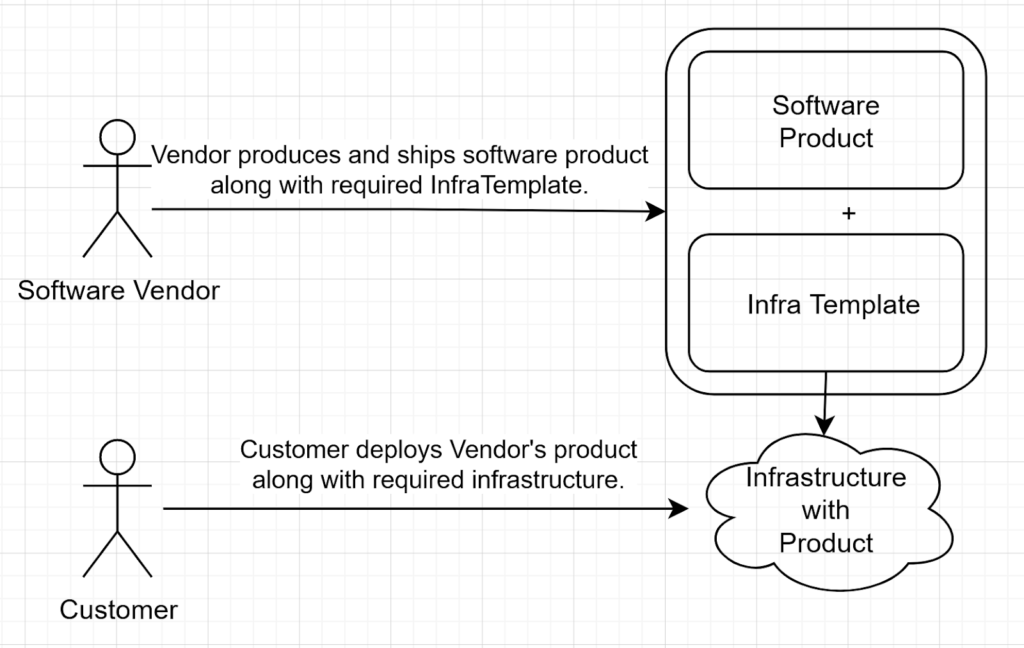 Complex business applications often require a complex infrastructure to be pre-deployed. In this case a vendor can ship their product along with the Infrastructure template in order to simplify the adoption process for the enterprise solution.

Another use-case is when some engineer needs to deploy a new infrastructure for testing or exploring and wants all to be set in a few commands. He or she can choose a template from the Github project or from the marketplace, set the values and spawn the required infrastructure in minutes:

As we can see from the use cases above, templating can dramatically simplify the tasks of DevOps and SRE teams, including deployment and testing in complex environments. Now, what are the components of infra templates? We shall explore the building blocks required to create an infra template, proceeding from infrastructure layering.

Modern cloud native infrastructures may contain a lot of different layers. Based on our experience we identify the following of them: 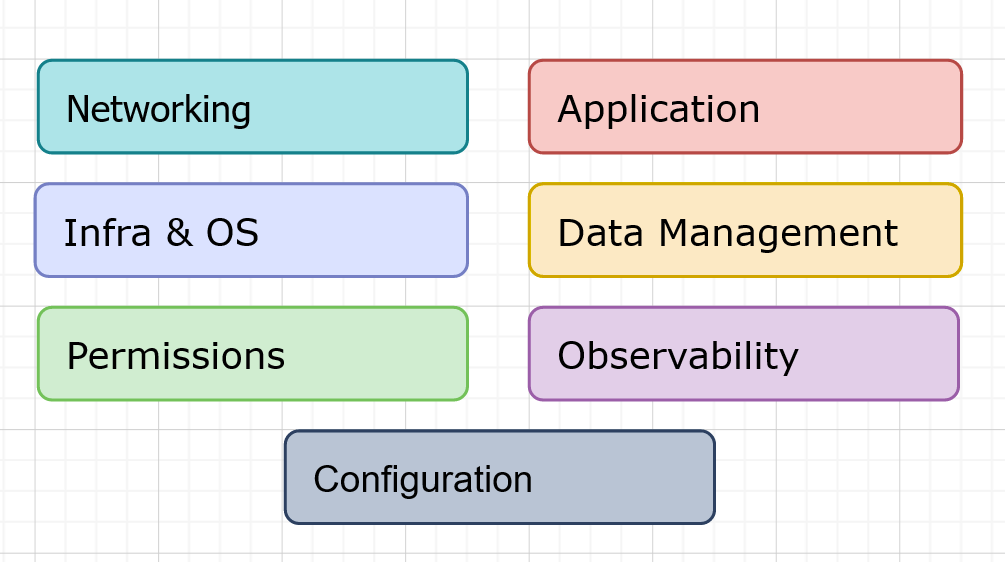 Let’s see how these layers could be covered with technologies and tooling.

With the use of modern clouds most of the networking is covered by Software Defined Networks and Cloud API’s that enable users to declare a network as a code. There are two the most commonly used approaches here:

Fine-grained permissions could be declared on different layers. Let’s check the most common ones.

Or, if you need to set it in Kubernetes, the most common way to do this is to use native RBAC. Sometimes you also need to have external authentication like using OpenID Connect Tokens.

But sometimes you need to link permissions within Kubernetes to your cloud roles, and so you need to use technologies like AWS IRSA, Azure Managed Identities, GKE Workload Identity. In this case you need to combine Terraform modules with Kubernetes manifests, getting outputs from one technology and passing them to another.

Cloud native applications can be divided into two groups:

Monitoring and logging can be provided by the cloud itself like AWS CloudWatch or Google Stackdriver, or by an external vendor like Datadog. Most of these solutions support Terraform for configuration.
In a cluster tooling like EFK or Prometheus/Grafana is mostly deployed with Terraform or as a Helm chart.

The most common way to store configuration and infrastructure declarations is in the Git repo. This approach adds accountability and enables us to restore required configuration versions to a certain point of time.
Another thing to consider is that you need to keep the resulting infrastructure state after applying the configuration. As it could contain some sensitive data, it is better to use a different storage, like object storage or database.

For storing secrets and certificates you can use cloud specific storages like AWS SSM, Azure Vault or opt for external tooling like Hashicorp Vault or SOPS.

So let’s recap how we could describe a modern infrastructure using a specific set of tooling for each layer:

Infrastructure declaration by tools and layers. 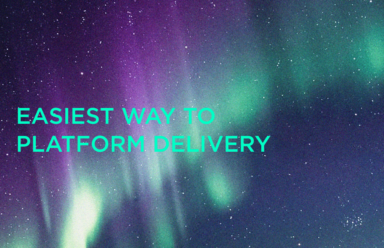 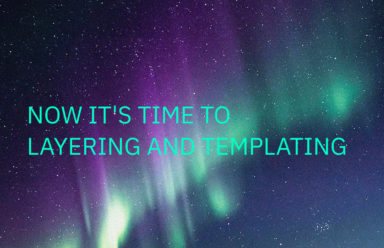 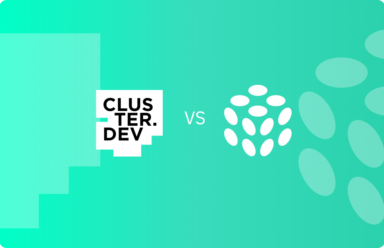 Cluster.dev vs. Pulumi and Crossplane